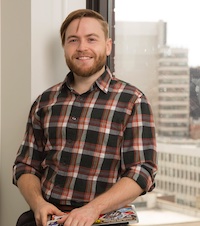 Preston Kent Moore, a native of Eastern Tennessee, who came to NYU Tandon because he “wanted to build real tools and systems” is the Secure Systems Lab’s newest Ph.D. He officially became Dr. Moore on May 16th at Brooklyn’s Barclay Center. In the space between his arrival in the fall of 2015 and his recent departure, Preston built a tool, wrote a new language, came up with a new approach to identify environmental bugs, won a best paper award, and used Pokemon and card tricks to explain and sell his research ideas.

Shortly before embarking on his newest adventure as a Senior Software Engineer at Anaconda, Preston shared some thoughts on how his journey to “improve the reliability of open source software” led him to leave a full-time lecturer post at East Tennessee State University to pursue a Ph.D. at Tandon. Actually, his teaching position was a motivating factor in that decision, as he was told he would need a Ph.D. to continue to work in academia. Once he knew additional schooling was needed, he chose NYU because he appreciated its “real-world” focus. “I wanted to build real tools and systems,” he noted, adding that he appreciated the hands-on approach he found at the school.

Preston confesses, though, that making the most of such an approach was not as easy as he initially thought. From early on, “I realized I was stepping into deep waters. In my previous academic work, everything had clean interfaces and layered designs. The real world has fuzzier interfaces.” For a number of years, those fuzzy interfaces were tied to a bug detection tool called CrashSimulator. It took several changes in approach, significant iterations on design, and a few unsuccessful paper submissions, before he was able to introduce and demonstrate the effectiveness of this tool. “CrashSimulator had a lot of low-level system details that I was not prepared for,” he explained, including being able to work with the types of “weird hacks” and jerry-rigged workarounds that are commonplace in industry. Progress came in fits and starts and occasionally, “I would find that I got nothing done in a particular week because I went to war on one thing.” The result of treading those deep waters though was an enhanced understanding of the problem at hand. “The learnings I have come from early disastrous planning,” he observed adding that, “It was a forcing factor to grow.”

Thrashing about in deep waters can also yield deeper insights. While working on CrashSimulator, one such insight was that, in this instance, the tool itself was not as important as the technique that makes the tool possible. Preston and his co-authors were able to codify what they called Simulating Environmental Anomalies (SEA), a technique that “utilizes evidence of one application’s failure in a given environment to generate tests that can be applied to other applications, to see whether they suffer from analogous faults.” The SEA technique and its applications were covered in a paper that ended up taking top honors at the 30th IEEE International Symposium on Software Reliability Engineering, and featured an opening analogy based on Pokemon.

According to Preston’s PhD advisor, Prof. Justin Cappos, “Preston has a knack for communicating ideas in a way that makes them accessible and entertaining. I was not at all surprised that he excelled while teaching several classes during his PhD studies at NYU.”

At home in NYC

While Preston’s new position may take him down some unfamiliar roads, at least the overall setting will be one he finds familiar, as Anaconda does have offices in New York. “I have fallen completely in love with NYC. It’s a huge change from Bluff City, TN. There is a sense of pace and energy here that makes you want to get things done. The hustle is real. It was a good environment for me.” He adds that the “hustle” he mentions was reflected in his lab mates as well. “The energy is contagious. You want to do well.”

In offering some parting advice to his lab mates, Preston states they should be using that energy. “Have a strong bias towards action. Take a swing at it and, if it’s a disaster, there will be other options. I never felt pressure to keep driving down a path that wasn’t working.”