There is a growing awareness in the open source software development community that, even if a new or revised program is secured at each individual step of its development, an uncontaminated final product is still not guaranteed. The nature of the software supply chain is such that multiple entities will generally interact with a product before it reaches the user. It is very common for a program to be written by one team of developers, and then have a completely different team do the testing, packaging, and distribution. So what happens in these “spaces in-between?” What is to prevent a malicious actor from tampering with the product as it is in transit from one stage to another? And, how do we know if the work was carried out only by those authorized to do so, or if the final product matches its expected design and function?

Over the past two years, a team at the Secure Systems Lab of NYU Tandon has been developing and deploying a framework called in-toto. It is designed to secure the integrity of the software supply chain from end to end, and at every point in-between. Developed in collaboration with a research team at the New Jersey Institute of Technology, the framework attests to the integrity and verifiability of all actions performed while writing and compiling code, and testing and deploying software.

In roughly the same time frame, a team at Google was contemplating how to provide a similar form of end to end protection for container images in the cloud. Enlisting the help of JFrog, Red Hat, IBM, Black Duck, Twistlock, Aqua Security and CoreOS, Google launched Grafeas, an API that “provides organizations with a central source of truth for tracking and enforcing policies across an ever growing set of software development teams and pipelines.” Build, auditing and compliance tools can use the Grafeas API to store, query and retrieve comprehensive metadata on software components of all kinds.

At the most recent edition of KubeCon+Cloud Native Con Europe 2018, held May 2 to 4 in Copenhagen, Denmark, Wendy Dembowski of Google and Lukas Pühringer of NYU, delivered a presentation that explored the combined potential of these programs to protect the “software supply chain security ecosystem.” The talk featured real-life examples, documenting how these tools have been deployed on projects for Debian, Arch Linux, reproducible builds, and Docker. Primarily, though, the talk pointed towards how these tools can be combined to facilitate continuous delivery in the cloud. As noted in the conference program, continuous delivery has become a “prevalent concept in the cloud native ecosystem,” by “drastically simplified and accelerated development and eployment of software.” However, in doing so, it has created “an attractive target for attacks.” Linking these independent projects presents an opportunity to ensure enhanced software supply chain security in the cloud, no matter what the delivery mechanism for the product may be.

Though potentially these two products could be combined in a number of configurations, in the talk Dembowski and Pühringer highlighted in the operation illustrated below. Basically, it shows in-toto using its metadata to verify the supply chain of a software product, and then pushing the results into a Grafaes attestation. The attestation—simply a “yes” or a “no” as to whether it passed or failed verification—would be forwarded to the Grafeas server in the cloud where it would instruct the “Admission Controller” as to whether or not it is safe to admit to the cloud. 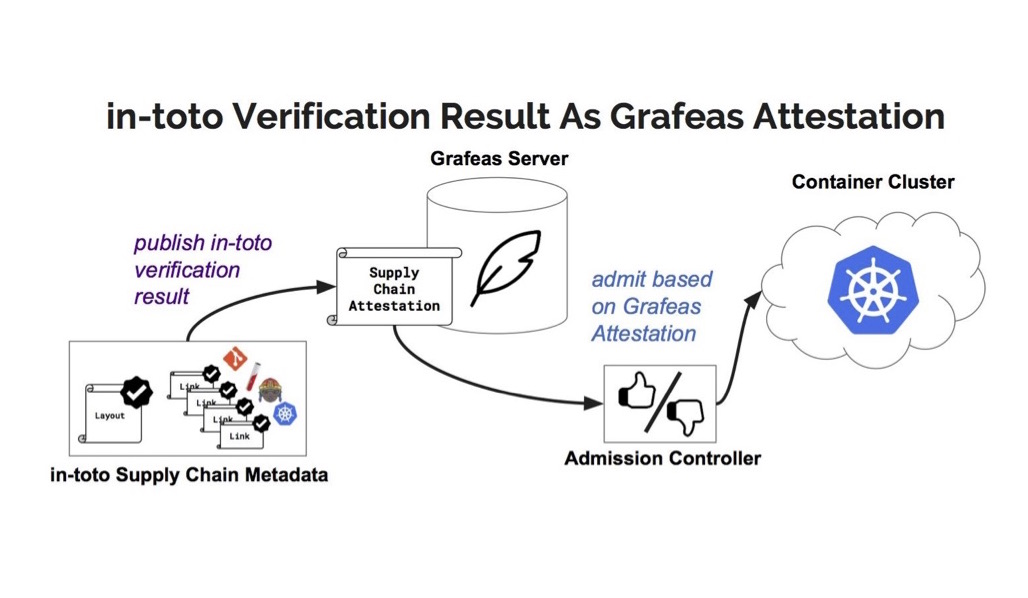 The value of such a merger would greatly reduce the attack surface for malicious players. An article about the conference, written by Antoine Beaupré for LWN.net, quotes Pühringer as saying that “Grafeas provides a well-defined API” that “allows the user access to where you can push metadata”—be it package versions, builds, images, deployments or attestation, such as those provided by in-toto. Because Grafeas is “well-integrated in the cloud ecosystem,” while “in-toto provides all the steps in the chain,” Pühringer concludes, “It seems natural to marry the two projects.”