This week, several members of the lab went to DockerCon 2017 to learn about some of the exciting new things happening in the Docker eco-system. We also gave a talk on TUF, focusing on it’s integration into Notary, one of the key security systems in Docker. 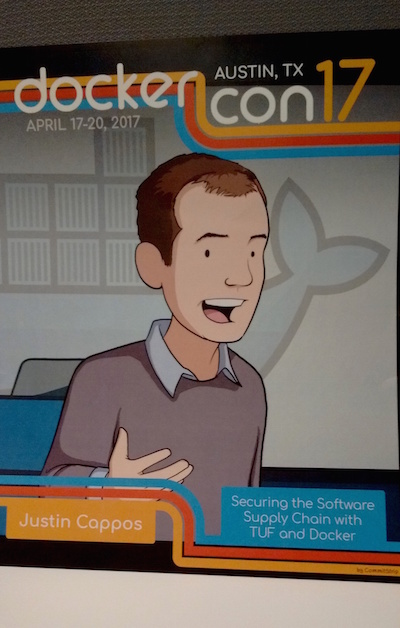 There are many amazing things happening in the Docker ecosystem. However, three main things stuck with me, and I’d like to highlight them here.

Securely distributing secrets. A major problem that arises in cloud systems is how to insert secret information into a new VM or container instance when you start it. For example, how do you get your configuration file with the database’s password into your cloud system? If you put it in your image, as some developers accidentally do, attackers can read out these secrets.

Docker’s security team has been extending Notary’s implementation of TUF to ensure the secure distribution of secrets. Their technique securely maps the secret into the file system of the worker container. Even though the secret is mapped as a file, it is only stored in memory and is never written to disk. The Docker team has added a lot of clever design aspects to make this possible. I’m sure I’ll be talking in more detail about this new technique in a future post.

Moby makes it easier to customize Docker. One of the highlights from the keynote was that Docker will be making it much easier to replace bits and pieces of their infrastructure. That is, the company has made it much easier to pull out bits of Docker so they can be repurposed. This change also makes it easier to build a custom component and insert it into Docker. This is particularly interesting for us because of our interest in integrating technologies like Lind into container systems.

Software supply chain. One of the key things our in-toto project has been focused on over the past few years is securing software projects early in the development process. A number of companies represented at DockerCon are clearly starting to think in this direction as well. Evidence of this new mindset could be seen in the amount of activity dealing with scanning containers to ensure that they do not contain libraries with known vulnerabilities, as well as assertions that the CI/CD process was run on the software.

This certainly indicates to us that we are focusing on a pressing and important problem. However, we can provide much more holistic security, starting with the VCS or even the editor. We also support much of the supply chain verification performed on software that goes into containers. We’ve had some discussions with people on Docker’s security team and with the security groups of a few other major projects. The response to the added benefits and additional rigor of in-toto has been very positive. Now we will start to work with them toward full integration of in-toto in these products.